I woke one morning with a vision for a book. I remember telling my girls about it on the way to school, however the thought of writing a book at this time in my life seemed almost laughable. Having two teenagers and a toddler, in addition to being a business owner, time was definitely a commodity. The idea was filed in the back of my mind and life went on.

A few months later, during a prayer time, the book idea came back. So strong, that I just threw out to God, Ok if you want me to write this, just give me a word, or sign or something. I didn’t even complete the sentence when Psalm 45 popped clearly in my mind. I was not familiar with that verse so I grabbed a bible and did not have to read any further than the first verse which said “my tongue is the pen of a ready writer”. God said to me in those few words, “my tongue, your pen.” “You make time in the next few months to get quiet with me and I will give you the words to write for this book.”

Thus began our working relationship and Tiny Hands was born. As the writing process was well underway, Tiny Hands made a distinct split into two different projects – one message with two very unique audiences. God told me to write the book in two ways: 1) as a gift book for women celebrating pregnancy, and 2) as a booklet for women facing crisis pregnancies. The inner text and photos would be the same for both books, but there would be a unique introduction and conclusion for each.

As the days went on, the passion and focus grew towards the crisis pregnancy booklet. God began to pull something out deep from within me. It was something I was not sure I was ready to face, however He kept telling me that this book was not going to go where I wanted it to go and it certainly was not going to go where He wanted it to go unless I was able to face the abortion I had when I was 20.

This was not a happy time of my life, and I can try to throw out any excuse from not being saved to the lifestyle I chose to live, to the friends I chose to have, but the bottom line was that I was raised in a church and was taught right from wrong by my parents. I just chose to make a wrong decision at that time in my life. I believe when God is ready to do a work/healing in your life, you are not jumping up and down in joy saying, “please Lord, take me back to that time in my life”, rather it is a struggle. Initially, I became defensive and almost defiant. This part of my life was officially “buried” and I did not want to bring it back up. It took weeks of this struggle before I knew what I had to do and that was tell the people I loved the most.

I firmly believe that forgiveness is instantaneous. I know exactly where I was when I was forgiven for the abortion. However, I believe that healing is a process. Even though I was totally forgiven 5 years ago, I still kept the secret buried. To be healed and set free, I would need to be able to talk about what happened in my life 20 years ago. I now understand that the best person to minister to someone who is hurting is a person who has been through a similar situation. God was going to use the Tiny Hands book to reach and help other women facing similar situations to what I faced many years ago.

We all have “junk” in our lives, either from our past or in the present. We would not be called humans if we did not have something to face and overcome. I am honored to say that I serve a God, who will not only forgive you from that “junk” but will use that situation in your life for the better, if you allow him. God is not in the business of taking a wrong in your life and making it worse. He wants to make it better and then wants to use you to help others.

So to break this chain over my life, I had to tell my family. Link by link, the chain broke with each person I told. When I had the abortion, the only person who knew was my friend who drove me. I told my husband one time only before we got married and then it was buried and not ever mentioned again. During this healing time, I told my husband first – not even knowing if he remembered our one time conversation 17 years ago. I then told my two daughters (12, and 14) and what a God teaching moment that was on so many levels. I told my sister who has been active in the pro-life movement and faithfully takes her 6 kids to a local abortion clinic weekly to pray for those inside. Finally I told my mother, who was by far the hardest because I knew the reaction I would receive and how disappointed she would feel because I did not come to her during that critical time of my life.

Being able to face and talk about the abortion I had in the past has truly opened the doors for me to move forward. I have told the people that would be the most difficult to tell and now feel comfortable speaking openly and freely about my past to anyone. I am ready for God to use me and to use this book to help other women facing crisis pregnancies. It is my fervent prayer that these women will choose life over having an abortion and that through this book, they will come to understand God’s extreme love for them and the baby growing within them. 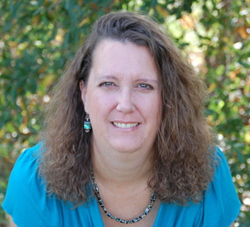 About Leanne Stevenson – Author of Tiny Hands that Hold My Heart

Leanne Stevenson resides in Concord, North Carolina and is a wife and mother of four children. She is the business owner of Concord’s Best Dressed Kids and active at her local church. Leanne is the President of Tiny Hands Ministries, Inc. whose mission is engaging in activities that save the physical lives of the unborn and the spiritual lives of mothers facing crisis pregnancies. Leanne is available to speak with churches, women’s ministries and youth ministries about her testimony, ministry and the pro-life movement. This book was birthed through a vision, prayer and God’s confirming word from Psalm 45:1.